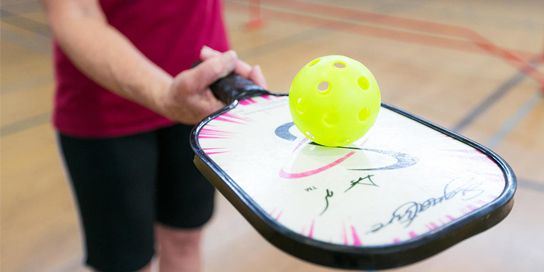 What is it? Pickleball is a sport in which two or four players use solid paddles, made of wood or composite materials, to hit a perforated polymer ball, similar to a wiffle ball, over a net. The sport shares features of other racket sports, the dimensions and layout of a Badminton court, and a net and rules similar to tennis, with a few modifications. Pickleball is traditionally played on a badminton-sized court. The ball used is similar to a wiffle ball, but slightly smaller. A pickleball ball typically moves at one-third of the average speed of a tennis ball and the court is just under one-third of the total area of a tennis court. The lower net and wiffle ball allow the game to be accessible to people of all ages and abilities, while still allowing more competitive players to test their skills.

Free for members of the O’Brien Fitness Center or $10 for non-members.